Public Events on Hold due to Covid-19

Due to Covid-19 we are not holding any public events. Inshallah for now we are only holding online events. 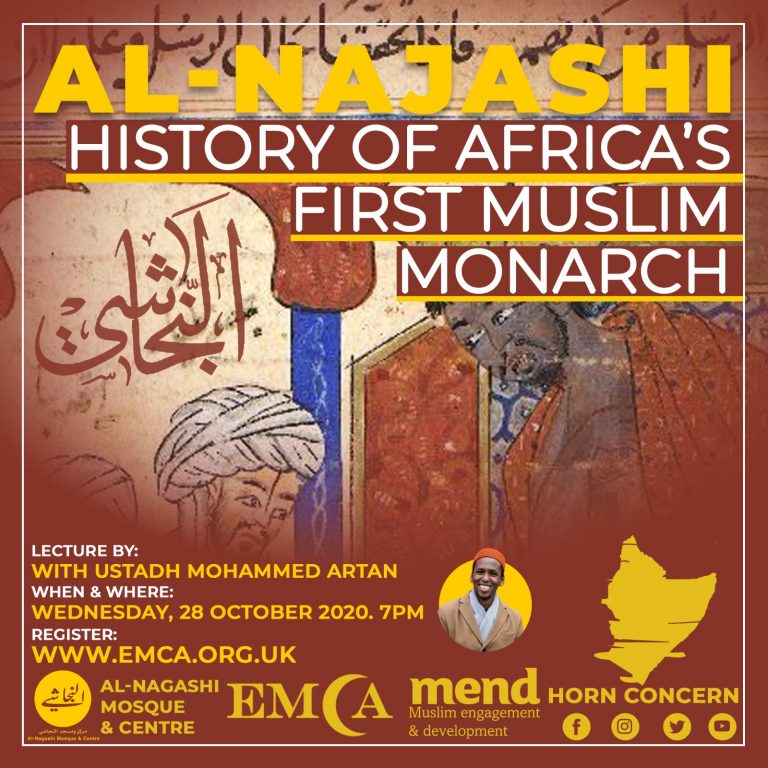 Northeast Africa, or ‘arḍ al-Ḥabashah’ in the 7th century was a place of prosperity, advancement of knowledge, fairness, and famed for its justice. That the prophet (ﷺ) knew about this is not exceptional, after all he (ﷺ) was surrounded by people from the Horn of Africa.

The Messenger’s (ﷺ) nurse, Baraka ‘Umm Ayman, was from arḍ al-Ḥabashah and growing up around her. There was a commercial quarter in Mecca for people that came from Northeast Africa (arḍ al-Ḥabashah). Host of able and well equipped mercenaries were located in Mecca, which later on, in the battle of Badr (2/624), the Quraysh hired to fight on their side.

al-Najashi acceptance of the refugees, and his sense of fairness led the prophet (ﷺ) ordering his companions and some of his closest relatives to migrate over to the other side of the Red Sea. This image would endure in Muslim and non-Muslims alike. In 1994 Anwar Haddam who was Algerian Islamic Party opposition leader fled to the US. He said in one of his interviews: “Clinton is like the king of Ethiopia in the dawn of Islam to whom the Prophet himself sent his followers to find shelter.”

Join us this Black History Month, as we explore one of the earliest and most famous monarch to have embraced Islam and aided it, causing a rift between him and his royal court and the powerful clergy.

Who was this man shrouded by mystery? Come with us on a journey of discovery….

To register for the event please go to https://alnajashibhm.eventbrite.co.uk